These images have just been taking up space, so here, have a random assortment of Two-Face-related trading cards! First up, how many people remember the ads for the Batman cards which came with Nerds candy? 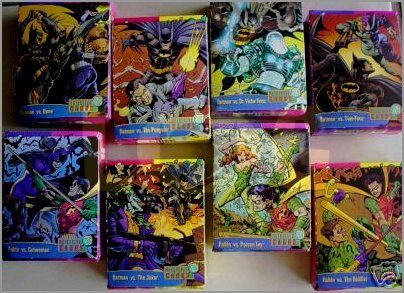 Because I do, but I'd never actually seen them all until I found images of them over at this Batman trading cards blog. You can see them all except Catwoman's, for some reason.

Like (most of?) the rest, this one's by the criminally-underappreciated Batman artist Norm Breyfogle. I'd like to see a better scan of this image, preferably recolored so the hair doesn't remind me of Batman Forever. Otherwise, leaping into action with a half-pinstripe suit and double-barreled shotgunts in each hand? That's My Harvey! *cue studio audience applause*

Next up, are Harvey's two cards from the Master Series Batman trading cards, which attempted to tell an actual story from the POV of the Joker. A noble attempt, even though nothing I've seen really made it look all that great. Part of that is due to the artists, who were very grotesque and Vertigo-ish. I believe both of these are by Dermott Power, one of the artists behind Batman/Judge Dredd: The Ultimate Riddle.

I'd actually like to know what the back of both these cards read, particularly since they're told by the Joker. I can only imagine how he'd find ways to pick on Harvey, even in that format.

Next up, we have Harvey paired with his, apparently, ideal opponent from the DC VS Marvel card set:

At first, I scoffed because, "Oh hey, let's just pair together the two criminals who have screwed-up faces, done!" But I suppose it could make for a mildly interesting gang war, even though Jigsaw is a pretty typical psycho mobster compared to Two-Face, who's only occasionally written that way himself.

I'm not sure how I feel about the art, though. Jigsaw looks uncharacteristically calm and boring, whereas Harvey looks like he's throwing a tantrum, while wearing half a tablecloth.

Let's end this on a proper palate cleanser:

Hell yes, Dick Sprang. That is all.
Collapse