Hey everyone! As usual, it's been a while between posts, and while the item I have today broke over a month ago, it popped up again over the past NYCC weekend, so I figured that it's time to prepare ourselves for what may well be Harvey Dent's long-awaited return to mainstream DCU... courtesy of Scott Snyder! 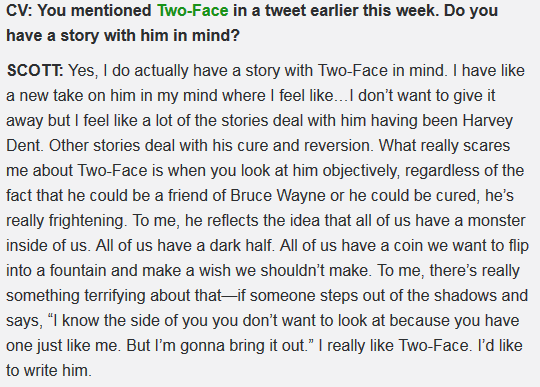 On one hand, I’m interested in the suggestion that Harvey would be utilized to expose the dark inner selves of others. On the other hand, I’m concerned with Snyder’s focus on those dark inner selves—and by extension, Harvey’s own dark side—over and above the more humane aspects of Harvey like his friendship with Bruce and his heroic past.

Snyder kinda makes it sound like most Two-Face stories focus on those, whereas the reality is that most writers depict Harvey as an all-evil, one-dimensional monster without a trace of good left in him. While there is a great deal of potential in exploring “the monster inside of us,” past experience leads me to worry that Snyder’s ideas will lead only to the same old tired Two-Face characterizations, only with more speeches and philosophy thrown in, ala Death of the Family.

More importantly, Snyder already has written Two-Face, and it was not good. Not good at all. He got Harvey wrong in a couple very important ways, all in the name of making the Joker look awesome. Between that evidence and the way he talks about his big plans for Two-Face, I fear that Snyder is someone who puts Big Ideas and philosophy above character depth and development. I don't want to see Two-Face used as little more than a vehicle for some grand philosophical idea. After all, the last time we saw that was Batman: Jekyll and Hyde, which you'll recall was ALSO about bringing out people's inner darkness that they've tried to suppress.

So yeah, while I’d like to see someone FINALLY address Harvey’s status in the year and a half (!) since his apparent suicide in Batman and Robin Two-Face #28, I have some serious reservations about the prospect of Scott Snyder writing a Two-Face epic, potentially one which could influence the character for years to come.

If anyone could have the pull to bring Harvey back to the mainstream DCU, it’s Snyder, so if he gets his wish to write a Two-Face story, here’s hoping that all my reservations will end up being for naught. As it is, though, I still wish and hope that Peter Tomasi will be the one to bring Harvey back. He's the only DC writer out there who I trust to do a halfway decent job with the character, and I would sincerely hope that whoever does tackle Harvey doesn't just sweep The Big Burn under the rug.

Of course they will, because they always do, but I'm still hopeful that they'll actually build upon that story instead of ignoring the suicide attempt and the history with Bruce. As always, we'll have to wait and see.
Collapse