After an inexplicable (yet appropriate) two-and-a-half year absence, Harvey Dent finally made his grand return to the mainstream DC Universe in what promises to be one of his highest-profile stories in his 74-year history! 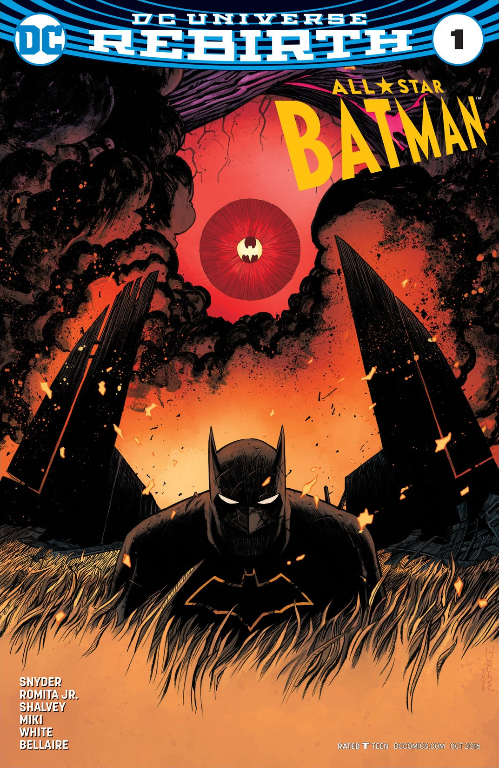 Scott Snyder—DC's current architect of all things Batman—had teamed up with Marvel legend John Romita Jr to bring us My Own Worst Enemy, an arc which kicks off a year-long epic featuring the classic rogues! With Harvey at the center and two influential superstars at the helm, this story has the potential to define Two-Face for years to come, just as Snyder has already done for the Joker and Riddler! In fact, as of last week, this issue sold around 350,000 copies, making it the highest profile major Two-Face story since The Dark Knight! So yeah, there's a lot at stake here for those of us who care about a well-written Harvey.

First, here's the spoiler-and-scan free review, accompanied just some of the many, many variant covers. 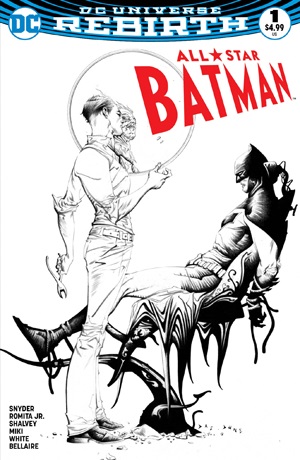 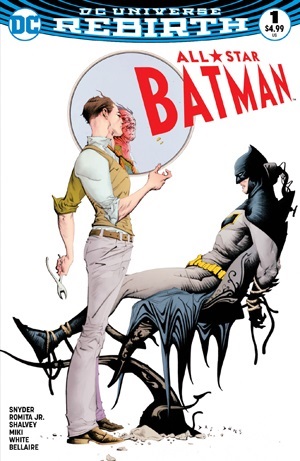 Sadly, I've yet to find a decent-sized high quality version of this Jae Lee variant.

After receiving a desperate plea from the good side of Harvey Dent, Batman vows take his old friend across the country to a secret location that will supposedly cure Harvey and destroy Two-Face one and for all. However, Two-Face has other ideas, and kicks off a plan that pits Batman against everyone from hired assassins, ambitious D-list rogues, average people looking to get rich, and perhaps even members of the Bat-Family! 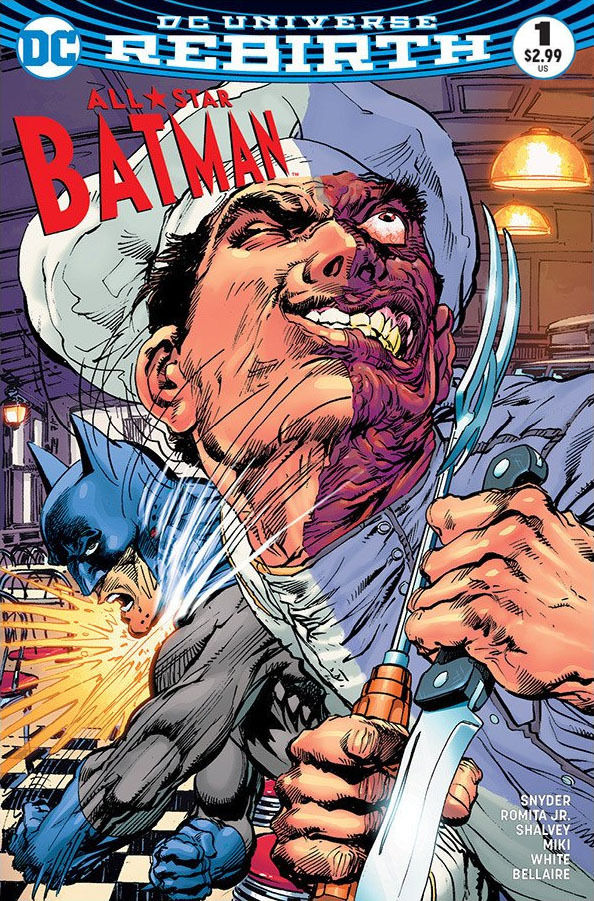 Nothing remotely like this happens in the issue. That's Neal Adams for you.

All in all, I found the debut issue of ASB to be a very promising start. While it's not quite worth the absolutely ridiculous $4.99 cover price, this story nonetheless has great potential despite some flaws. While Snyder does indulge in his penchant for having the villain monologue about biweekly BIG IDEAS THAT WILL SHAKE BATMAN AND HIS FAMILY TO THE CORE, the story is breezy, action-packed, and rather fun. 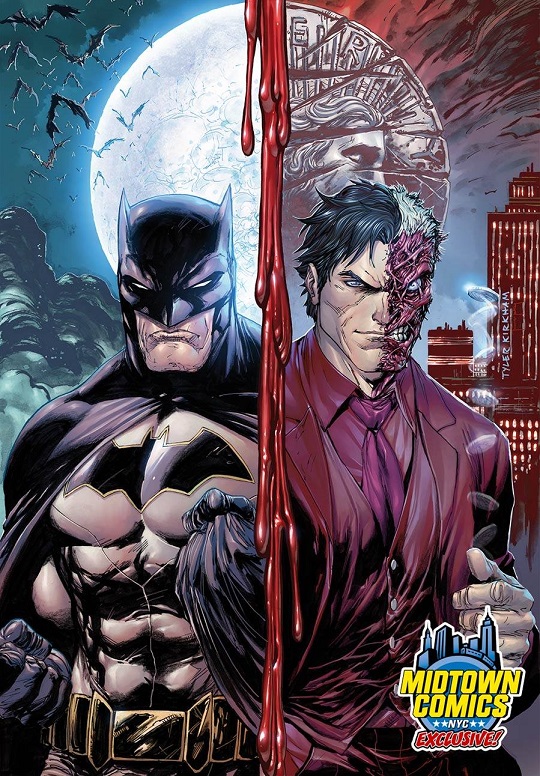 The art by JRJR and the daytime setting gives the story a tone and atmosphere that sets it apart from the average Batman story, particularly those by Snyder, who has always emphasized the “dark” part of “dark knight.” A potential downside, however, is that JRJR's distinctive art style is not everyone's cup of tea, as he's one of the few comic artists whose quality can vacillate between being gorgeousness and hideousness. While I didn't particularly like his work here (with inks by Danny Miki), the general fan consensus seems to be that JRJR is at the top of his game, so YMMV. 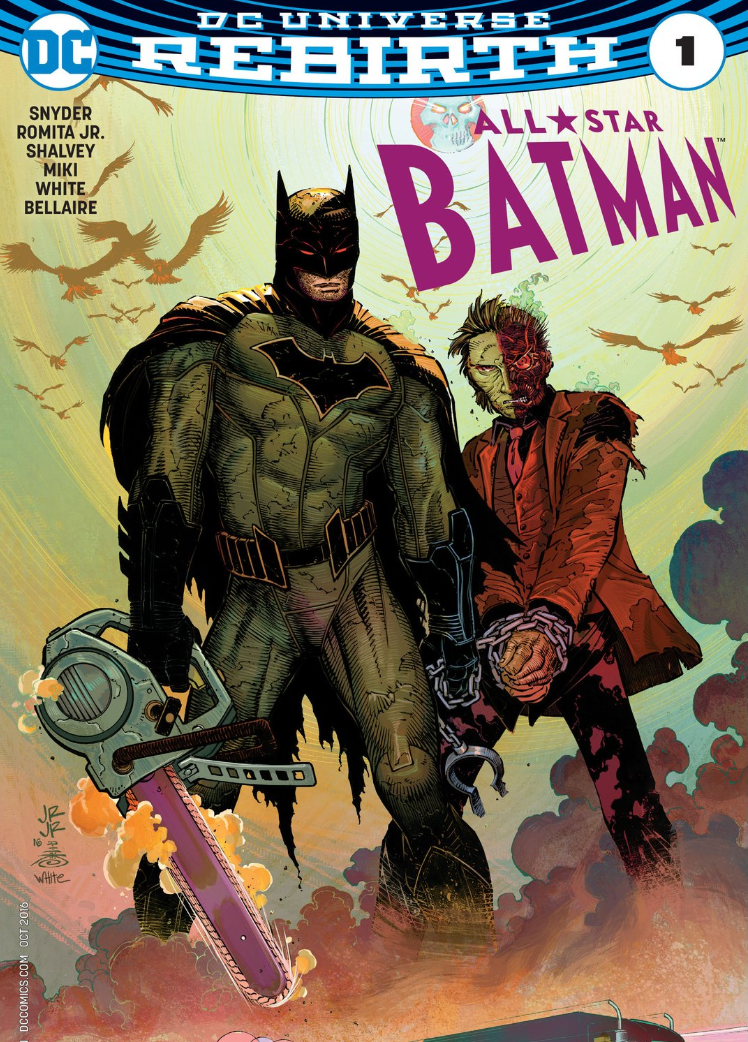 Yeah, this just... this just seems awkward to me. Especially Harvey's proportions.


The biggest problem with this issue is that the first half is told in a series of needlessly jumbled flashbacks, starting with modern day, then going back 22 minutes, then 2 hours ago, then 2 weeks ago, then 20 minutes ago, then modern day again. The cuteness of the gimmick isn't really enough justification to jump around like that, especially when the art briefly makes things even more confusing. Thankfully, this doesn't derail the story right out of the gate, and it picks up again once the it becomes linear and bloody well gets on with it. 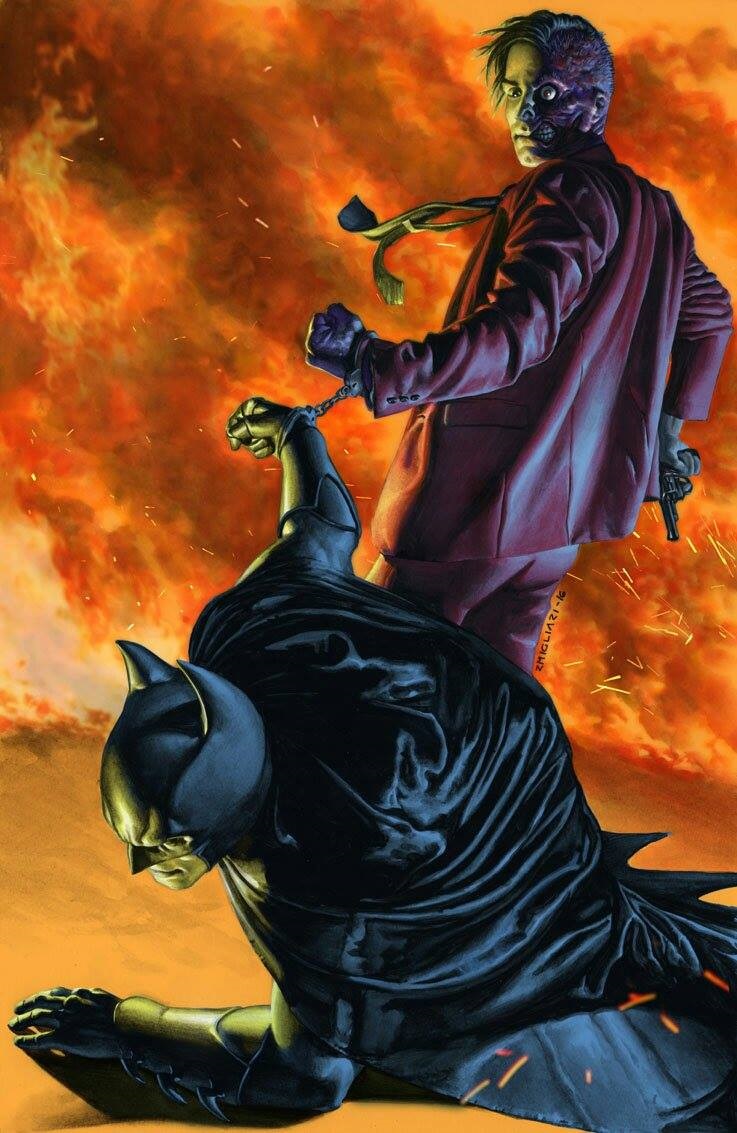 Rodolfo Migliari's variant here might just be my favorite of the lot.


As for Harvey himself, I'm relieved to say that he's well-written, and that he's not the creature of pure ultimate evil that I was expecting/fearing from Snyder. Or at least, Harvey Dent isn't, but the same can't be said of Two-Face. Yes, Snyder is one of the rare writers to give Harvey full-blown Dissociative Identity Disorder, where he has two distinct personalities that can keep secrets from one another. This is not my platonic ideal for Two-Face's mental illness, and it doesn't fit The Big Burn, which will supposedly be addressed in a future issue. That said, the use of DID worked wonders for Harvey in Nightwing: The Great Leap, and Snyder seems to be playing with a similar internal struggle, to the story's great credit.

The other great pleasure of this story is the appearance of four classic villains (ranging from B to D list), as well as the promise of more obscure rogues to come. This is the first time I've ever seen Snyder not only go deep into Batman's classic rogues (as opposed to creating his own whole cloth), but also write them in a fun way that isn't dependent of trying so hard to make them inhumanly menacing. After being worn out by Snyder's villains like the Joker, James Gordon Jr, Thomas Wayne Jr, the Court of Owls, Mister Bloom, and Doctor Death, it's damn refreshing to see him just have fun with normal schmoes like Firefly and Killer Moth.

Between the unusual setting, the classic rogues, the fun action, and an intriguingly fresh take on Two-Face, My Own Worst Enemy has a lot of potential to not suck. Naturally, I'm going to remain anxious for the next year, as I await to see where this Harvey will fit into Snyder's overall All Star Batman epic. But for now, it's a good start, and I'm itchin' to delve into spoilers and scans already!

Welp, for better or worse, this is the start of a defining event in the history of Two-Face. If you want to check it out for yourself, All Star Batman is available at finer retailers everywhere under a number of variant covers, as well as digitally on Comixology.com!
Collapse